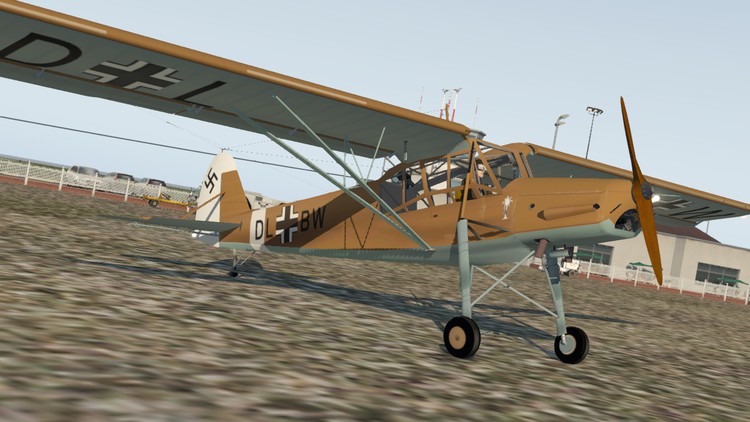 Pilot training in the Fieseler Storch

The Fieseler Fi 156 Storch (‘ stork ‘ in German ) went down in history as one of the most important aircraft of World War II ; It is the company’s best-known aircraft, due to its extensive use during the conflict.

An excellent STOL (short take-off and landing) apparatus that made its maiden flight in early 1936 . Structurally, it was a high-wing braced monoplane, of mixed construction with a conventional tail unit with struts and fixed landing gear with tail skid. It was powered by an air- cooled, inverted-V eight-cylinder Argus As 10C , and its spacious glass cabin gave its three crew members excellent visibility.

As with the Fieseler Fi 97 , the success of the device lay in the company’s characteristic high lift system, using in the initial versions a fixed slat along the entire span of the leading edge of the wing and with ailerons. grooved throughout the trailing edge.

The test flights of the first three prototypes (Fi 156 V1, V2 and V3) showed the STOL capacity of the device, which far exceeded those expected. It could take off from grass runways of about 60 m and land in a third of that distance, that is, in just 20 m.

Built to compete with similar fixed-wing aircraft from Messerschmitt and Siebel and with an autogyro from Focke-Wulf , the three prototypes were followed by a fourth, the Fi 156 V4 , equipped with skis to operate from snowy slopes, a fifth, the Fi V5 , pre-production and, already at the beginning of 1937, ten Fi 156A-0 for evaluation in service. One of the latter was shown for the first time in public at an international competition in 1937, while the Fi 156A-1 was being mass-produced .

Flight tests showed that the Luftwaffe had acquired a multipurpose aircraft and in fact during World War II, the Storch operated almost everywhere German forces were. Total production in its different variants was 2,900 units.

During the war, the Fi 156 was built for the Luftwaffe by Morane-Saulnier in France and by Mraz in Czechoslovakia. Both companies continued to build the Storch after the conflict, being designated by Morane-Saulnier as MS500 [MS 501 and 502 and K-65 Cap. by Mraz.