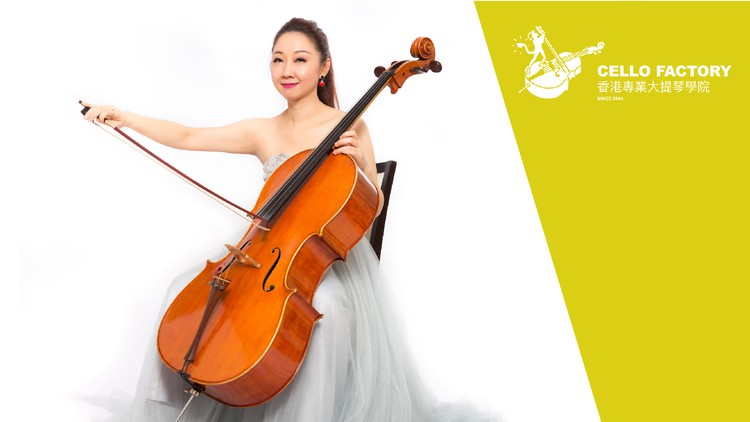 Do you know all the basics for playing the cello?

☑ Understand basic right hand techniques (Proper way to how to hold the bow and play the cello with it, Bow speed control, String Crossing)

The course is conducted in Cantonese with English subtitle

This is a beginner course tailored to help everyone who has just started playing cello. But it is also very useful for students who wants to polish their movements and improve their playing techniques.

In this course, you will:

· Learn the basic and fundamental techniques for playing cello;

· Understand the reasons behind common mistakes for right and left hands; and

· Know how to fix common problems and improve your playing skills.

Clara’s passion and vision in bringing music to as many people as possible has led to the establishment of Cello Factory and Hong Kong Cellist Society (HKCS) in 2004. Cello Factory, where she serves as the School Principal, is a music school that offers music education for string and other instruments and for ensemble musicianship. On the other hand, HKCS provides a platform to all musicians for music exchange and sharing and opportunities for performance; to nurture a healthy appetite for classical music; and to encourage interaction between musicians and the public.

Under the support of Forever Red Project by HKCS, she had her first Cello Recital in 2012 and started her journey of musical reflection and discovery in her annual concerts in collaboration with different media and artists in Hong Hong.  In view of her success in the local music scene, she was encouraged to explore with her music and was also invited to perform abroad. She made her first international debut in Carnegie Hall, New York in March 2014 with the Fellowship granted by the Asian Cultural Council (New York) and performed in the Faculty House at Columbia University. In 2015, she held two concerts with new concepts – a “Serendipity” encounter with modern dance and “The moment” of ground-breaking performance on music and the theory and philosophy of martial art, Wing Chun – which brought veteran dancer and martial art master to the stage to perform with the cellist. Later, she was welcomed by Shen Shu Yi Foundation to play in Shanghai and brought her concert “My Dearest” for a Taiwan Tour in 2017 by the invitation of Nicola’s Creative Agent. 2019 will mark a new milestone for Clara as she will launch a cello CD with financial support raised via crowdfunding under the theme of “Just Meet You” in hope to bring her music and passions to more audience.

Before you start playing

Placing the bow on the strings

Playing with the arm’s weight

Placing the hand on the fingerboard

Hitting the strings with fingers

Keeping fingers on the fingerboard