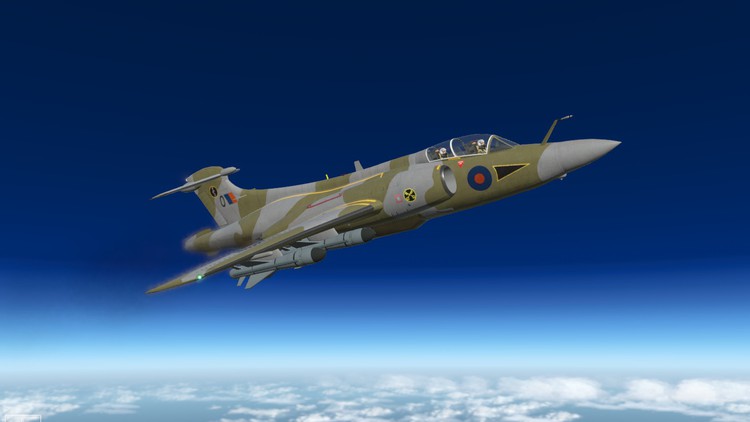 The Blackburn Buccaneer was a British low-level strike aircraft with nuclear weapon delivery capability serving with the Royal Navy and the Royal Air Force between 1962 and 1994, including service in the 1991 Gulf War. The aircraft was designed and initially produced by Blackburn Aircraft at Brough on the northern bank of the River Humber in the East Riding of Yorkshire.

The Buccaneer was originally designed in response to the Soviet Union’s Sverdlov-class cruiser construction programme. Instead of building a new fleet of its own, the Royal Navy could use the Buccaneer to attack these ships by approaching at low altitudes below the ship’s radar horizon. The Buccaneer could attack using nuclear or conventional bombs and carry short-range anti-shipping missiles.

To dramatically improve aerodynamic performance at slow speeds, such as during take-off and landing, Blackburn adopted a new aerodynamic control technology, known as boundary layer control (BLC). BLC bled high pressure air directly from the engines, which was “blown” against various parts of the aircraft’s wing surfaces. This is not easy to replicate in XP, but a few tweaks have helped with the lift.

The Royal Navy retired the last of its large aircraft carriers in 1978, moving their strike role to the British Aerospace Sea Harrier, and passing their Buccaneers to the RAF. After a crash in 1980 revealed metal fatigue problems, the RAF fleet was reduced to 60 aircraft, while the rest were scrapped. The ending of the Cold War led to a reduction in strength of the RAF, and the accelerated retirement of the remaining fleet, with the last Buccaneers in RAF service being retired in 1994. Buccaneers saw combat action in the first Gulf War of 1991, and the South African Border War.

XPlane: The aircraft has a new 3d exterior model, has a full 3d cockpit with many 3d instruments, full FMOD sounds and lots of animations. The huge airbrakes are animated – as are the folding wings and the nose opening (switches to the right side forward console) – and a sliding canopy. The cockpit is a sim friendly version of the Buccaneer layout focusing on instruments being well placed for the sim pilot. There are some 2d contemporary instruments on the side panels – and an autopilot. A switch to the right side forward toggles the bomb bay door fuel tank. If you are flying the Royal Navy versions, then the bulge tank should be off (although you will still get the fuel). The default is with the bay door tank as most aircraft eventually got converted.

There is also a HUD. The Buccaneer was equipped with the “Strike Sight System” HUD intended to help set up bomb “long throw”. The display had a roll only horizon line and also a simple speed indictor. In this model to add to the fun in the cockpit the HUD has been developed further to show heading, more speed information, gear status, flap status, pitch information and radar altitude 0 to 500ft.

Start up is easy – flip the battery on and press the starters (left side panel). The fuel dials can also be used to select the tanks to be used. Click these off to shut down. Take-off will need 1 notch of flap – the flap also deploys a little aileron as extra flap. There is a red notch on the HUD showing normal take-off speed.

For landings the Buccaneer has an enormous airbrake – this brake really does take speed off quickly – I suggest setting a key up so that it can be toggled quickly and easily. There is also an arrestor hook if you are game to try a carrier landing. Carrier take-off is pretty standard.

The weapons pack a punch. The default load is 4 * 1000lb bombs in the rotating bomb bay and 4 * Sea Eagle air to ground missiles under wings. As alternatives in the weapons fitout there are also underwing Matra SNEB systems each with 18 rockets, Paveway / PaveSpike systems and Martel AS37 Missiles.

There are 8 liveries included covering the Royal Navy, RAF and SAAF in various plain and camouflage colours – including the Gulf War Desert Pink.